Last week Anna Zeide, the author of Canned, questioned the blogger about aspects he covered in his four-part series on the book. This week they resume their dialog and explore the differences between the food movement and the food industry to see if there is truly middle ground between the two perspectives. Once again, the author tends to ask more questions, and the blogger tends to defend his perspective.

Dr. Anna Zeide: I’d love to hear more about how you think of food science as the “middle path” between the food movement and food industry. I don’t necessarily see it that way, and am not sure that your 4th post really illuminated that question for me.

Dr. Rob Shewfelt: I answered this point partially in the previous post. As I view it, Big Food is NOT about the technical side of the business which is the purview of food scientists who are employees. Marketing tends to run the show. Marketing is about sales, and sales are about trends. Clean labels, for example are NOT a food science idea. They are part of the food movement’s view of the world. In that view chemicals are bad, but familiar ingredients are not. As so nicely illustrated in Baking Powder Wars, baking powder, particularly those made with cream of tartar, is a familiar ingredient and thus not a chemical, even though its chemical name is potassium bitartrate.

Baking powders have an acid that activates the carbon-dioxide generator in a chemical reaction in the presence of water to produce the gas that makes the bread rise. The way that Marketing sells the product by putting Aluminum-Free on the front of the package to suggest that it is chemical free (at least from alum) even though the ingredients are MONOCALCIUM PHOSPHATE (becomes phosphoric acid in water), SODIUM BICARBONATE (generates carbon dioxide when reacting with the phosphoric acid) and CORN STARCH (primarily to give it bulk). In food chemistry we call these properties functional properties. 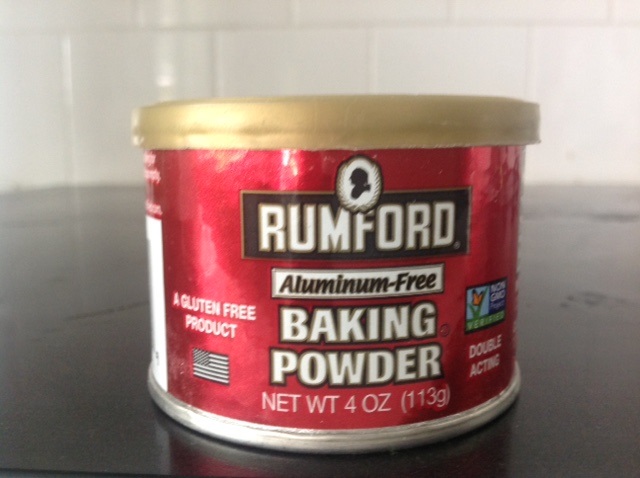 When a product developer (usually a food scientist) is asked to replace a chemical ingredient with a familiar one, the first place they look is a familiar ingredient that has the same or a similar chemical present. Then the food scientist tries to match up the functional properties of the specific chemical with the familiar ingredient. The problem frequently is that the familiar ingredient is more chemically complex than the simple chemical ingredient. Other chemicals present could have adverse effects such as leading to development of an off-flavor or an off-color. I also understand that some companies are using some very sophisticated water chemistry to change the properties of the water or other compounds present to keep the clean label without having to use objectionable ingredients.

Anna: As with any movements, I agree that there are certain publications and figures who oversimplify their messages in order to reach average consumers with dumbed-down messages, and that marketers from big companies often follow their leads in ways that don’t really help anyone. A friend of mine recently wrote this piece on clean labels, which I agree with, and which I think you will find of interest.

Rob: I read the article. It is very good. It illustrates what I meant when I indicated that the food movement and Big Food benefit from each other and food scientists get caught in the middle. I disagree with the last paragraph in that article, however, as Big Food will continue to use clean labels as a way to increase opacity and NOT transparency. I also admit to being jealous of Nadia Berenstein as she appears on Science Friday, but I sent them a copy of my book and proposed processed food as a topic. They never even sent me a reply. Maybe I am just a sore loser, but I believe that NPR is biased against any form of food processing.

Anna: As for the “food movement,” if it can even be referred to as a single movement, I believe that only one branch of it is most concerned with “processed food” as you outline in your blog posts.

Rob: OK, you used the term, not me. To be fair, you used the term “consumer movement” more than you used “food movement,” but both terms are used frequently in today’s media. I have struggled with a term to call “the opposition” to processed food. In my book I used “food pundits,” in a post I called them the “food evangelists,” and more recently I have referred to them as “pop nutritionists.” The food movement seems to be preferable to the other terms. I agree that the food movement is much broader than being anti-processed food. The subject of the blog, however, is defending processed food from its critics, most of whom associate with the food movement and, in many cases, either woefully ignorant about the technical aspects of food and nutrition or deliberately misleading in their commentary.

Anna: There are many other strands that exist in the food movement, and many that concern me even more greatly–strands that are concerned about (migrant) labor abuses in the agricultural industry; about the pollution and environmental effects of industrial food production all along the chain; about issues of food justice and how class/location/race determines people’s differential access to nourishing food; the decline of American understanding of the connection between the food they eat and the earth that produces it and feels its effects; animal welfare issues on factory farms; agricultural subsidies that make non-nutritious food cheaper than fruits and vegetables (even canned or frozen ones!). All of these topics are much more diverse than simply a question of “processed food” or not, and so, though I do consider myself a proponent of the “food movement,” that doesn’t mean I align with all others who are part of this group, on all topics.

Rob: I am sympathetic to the plight of migrant labor which I address briefly in my book and also on one of my blog posts on food chains with particular respect to middlemen and the devastation of Maria to Puerto Rico. Environmental considerations are critical, but I find the solutions offered by many in the food movement to be over-simplistic, like eating organic foods. Organic is not always the most environmentally sound practice. In In Defense of Processed Food I devote an entire chapter to sustainability. I confess to being a sustainability skeptic before writing my book, but I changed my perspective based on my reading of the scientific literature as I researched that chapter. BTW, a case can be made that more environmental damage is associated with growing and distribution of fresh fruits and vegetables than in the manufacturing of many processed foods. Food justice and the maldistribution of food in our country is another topic that interests me. I serve as the deli man at our local food pantry every Monday evening to help alleviate the situation. Many of the foods we distribute are processed like canned meats, fruits and vegetables; peanut butter; and store-baked bread.

Part of the problem, as I understand it, is due to being in a free-enterprise society. Cuba, under the Castros had a much more equitable distribution of food, but I am not sure that the average Cuban ate as well as the average American. Food justice is a very complex issue that is not amenable to simple solutions.  Subsidies for grain products is another complex issue that tends to be over-simplified by members of the movement. Fruit and vegetable crops are much more difficult and expensive to grow and distribute than grains because fresh produce is so much more perishable. Soil amenable to grains is not always satisfactory for growing fruits and vegetables. I have seen some data that suggest that there is not enough fertile land in the USA to grow enough fresh fruits and vegetables to provide five a day for every living man, woman and child in the country. With respect to animal welfare, I believe that meat, particularly red meat, will be available only to the very wealthy in 2040 or so, not because of the welfare issue, but because of sustainability. The rest of us will be forced to eat more plant-based diets or consume clean-meat products.

Anna: I agree with you that there’s some science-phobic rhetoric that pervades some of the speech of food advocates (e.g. The Food Babe), and that a lot of the calls for a return to some mythical past when all food was local and organic is ahistorical and doesn’t contend with the realities of our current food system. In general, one of the problems I see with many of your claims is this straw man of the “food movement” that doesn’t really exist in the form you portray it, as when you write in the third post, “the food movement commands certainty and sees any questioning of cherished principles as heresy.” Who is this “food movement”? Are all its proponents really sharing the same message? Which “cherished principles” are most upheld? I think the answers to these questions vary depending on who you ask.

Rob: The food movement in the context of my straw men are Michael Pollan, Michael Moss, Gary Taubes, Mark Hyman, Marian Nestle and others who tell us to avoid processed food while rarely defining it. With the exception of Nestle and to a lesser extent Pollan, they don’t have an appreciation of the basic principles of nutrition. They rail against unpronounceable ingredients and chemicals in our food without acknowledging the basic concepts that

Toxins or pathogenic organisms in food are more likely to be part of nature than part of synthetic origin made by humans. The major dangers associated with processed food are due to mishandling of raw materials or finished products and the multiplication of a single error due to the mass production of an item.

Next week: to be continued and concluded

One thought on “Canned revisited: A dialog between the author and the blogger continued”

Food Scientist GreenEyedGuide is your guide to the science behind caffeine, energy drinks, and the 5 Levels of Fatigue.