I typically use the fifth Tuesday of a month to update items from previous articles on the blog. This week I wish to defend a governmental action, two items my parents fed me when I was young that are now much maligned, and one of my go-to snacks that is also coming under fire.

Nutritional information on restaurant menus and displays is now required. The long-delayed provision of ObamaCare is now the law. Finally! I am hopeful that this information will now clear up the misperception that a fast-food meal contributes many more calories than one from a casual dining establishment. I know that I am are much more likely to overeat when served at a table than when I order at the counter. Although this move is unlikely to make a major dent in our obesity crisis, it will help conscientious diners become more informed about the nutritional quality of their meals out. There also seems to be an ancillary benefit that chains will reformulate some of their more calorie-laden dishes, but I anticipate there will be some chains who will advertise the most calories you can buy for the money! 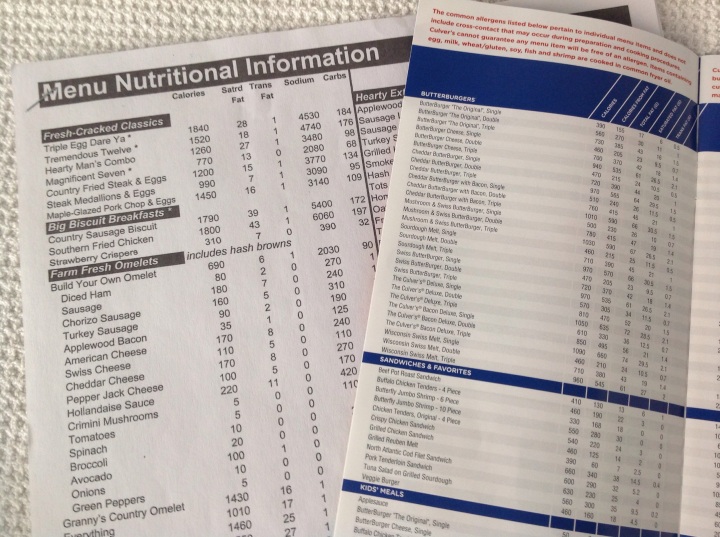 Last week I went to a sit-down, casual-dining, chain restaurant one day and a fast-food place the next day. I was interested in seeing the nutritional information on my meals. I only had an omelet and some decaf coffee the first day for a total of 790 calories (plus some calories for the cream in my coffee not listed) and a whopping 2200 mg of sodium (92% of my daily value!). The next day I had a fast-food burger and fries with a Diet Pepsi which totaled 810 calories and 1275 mg of sodium. In both cases, I needed to look for the nutritional information. Diners not wishing to know the nutritional details can rest easier. I also noted that the fast-food information was more detailed than the casual-dining sheet. To get the lowest calorie burger-and-fries combo at the restaurant serving slower food would deliver 1650 calories and 1950 mg of salt, much more than I wish to consume at a single meal.

Chocolate milk has a terrible reputation. Many pop nutritionists are wary of dairy products in general, but most of them consider chocolate milk a forbidden food! I understand that it does have more sugar than what a child should have, and that non-flavored, low-fat milk would be a better option. I believe that there is no better daily product for a growing child with respect to protein, vitamins and minerals than milk. If a child absolutely refuses to drink regular milk like me when I was young, I believe that the benefits of the milk outweigh the drawbacks of the added sugar present with the chocolate flavoring. Sugar could be cut back in other places.

Sugar-coated cereals are also forbidden foods as described in a previous post in avoiding the power struggle over eating in families. I confess that this one makes no sense to me. I am sure that there are some other people who eat their breakfast cereal without sugar. I do by adding sugar free syrup to a whole-grain cereal with at least 8 grams of dietary fiber per serving. Both my Wheat & Bran Shredded Wheat and my Original Fiber One come with 0 grams of sugar per serving. When I was young I would add at least one spoonful of sugar to my oatmeal or non-sugar-coated cereal like Grape-Nuts Flakes. Since a regular breakfast spoon holds about 6 grams of sugar (a measuring teaspoon holds 4), I suspect that I was getting at least as much sugar on my Grape-Nuts Flakes as I was getting on my Sugar Frosted Flakes. Parents wanting to minimize the sugar at breakfast to under 10 grams need to ban sugar from the table (including honey and maple syrup) or eliminate pre-packaged cereals from the options available at breakfast.

Energy bars have been described as “a candy bar sprinkled with a multivitamin” by Catherine Price in Vitamania, the subject of my book review next week. But are these processed products really that easy to categorize of are we dealing with a gross oversimplification? I will let you decide from the images below. Only one bar is an actual candy bar. The others are not. 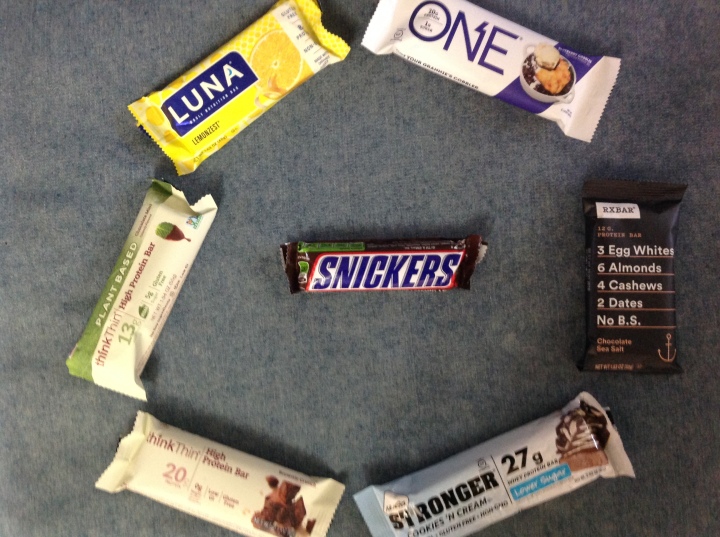 Looking at the actual nutritional values of the bars we see that none match the glory of the Snickers bar.

Note, all but one bar is under 60g and each bar delivers under 300 calories. All of the energy bars contain less than half the sugar, at least twice the protein, and less fat than Snickers. It would appear that the energy bars I consume are NOT merely “a candy bar sprinkled with vitamins.” WARNING, however, that the plant-based and regular Think Thin bars have more than 15 g of sugar alcohols!

The point is that before we make snap judgements about a processed product, we need to look at the nutritional label. Many energy bars are high in sugar and many are not. Sugar alcohols can provide sweetness without contributing to sugar content. The problem with such ingredients, however, is that they can cause gas. Some people are more sensitive to the gas producing properties of sugar alcohols such as maltitol and sorbitol than other people. Some simple experimentation can help determine one’s personal sensitivity to them. My limit is about 10 grams of sugar alcohols at a time without severe gas consequences.

Bottom line. It is easy to criticize certain foods without knowing the full story. Fast foods are not necessarily more unhealthy or higher in calories than foods from other restaurants or even homemade foods. Nutritional information for food in all chain restaurants will give interested consumers a chance to make more informed choices. It is wise to reduce sugar consumption, particularly among the young. Also important for children and teenagers is obtaining sufficient protein, vitamins and minerals. I prefer to get those nutrients from foods like milk and breakfast cereals rather than from supplements. If a child will not consume milk, chocolate milk might be a better option than no milk at all. Sugar-coated cereals probably contain about the same as or even less added sugar than a low-sugar cereal with the sugar added a the breakfast table by the child getting ready to eat it. Finally, overgeneralizations such as all of one category of foods is the same as another are generally incorrect. Some energy bars are sugar-coated candy bars, but most are not. The best way to find that out is to read the Nutrition Facts statement.

Next week: Vitamania: Our Obsessive Quest for Nutritional Perfection

One thought on “In defense of nutritional information in restaurants, chocolate milk, sugar-coated cereals, and energy bars”