Readers of this blog know me as a defender of processed foods. That does not mean that I avoid fresh, whole foods. My life as a researcher in food science focused on fresh fruits and vegetables. My foremost subject was tomatoes. Eighteen of my 103 published scientific articles featured fresh tomatoes. I benefitted from the knowledge of my students, my colleagues, and my reading. Note that I made these observations 20-40 years ago. Some of his knowledge is old, but I suspect that much of it still rings true. Here are some of the tidbits I learned by design or happenstance on that journey:

Tomatoes are sensitive to both cold and warm temperatures. Most consumers store fresh produce in the refrigerator. Some fresh fruits and vegetables are sensitive to low temperatures. The syndrome afflicting tomatoes and similar fruits is chilling injury. Tomatoes should not see the inside of a refrigerator. Symptoms develop when stored below 50ºF. Chilling leads to off-colors and off-flavors. Chilled fruit can also become mealy. Our focus was on the biochemical mechanism that caused it. Tomatoes are fussy. Problems also occur at temperatures above 85 ºF. I know of no other fruit or vegetable so sensitive to both cold and warm temperatures. It’s not easy getting tomato to market.

Following the tomato from field to the supermarket. I was a part of a Postharvest Systems Team. On the team were an engineer, an economist, an extension specialist, and me. Throughout our research lives, some scientists left the team and others joined. Other members included two horticulturists, another engineer, and another economist. We took a systems approach to following the tomato and other crops from harvest to market. We observed these items at each step along the way. Previous studies focused on individual steps, but we were the first to look at an integrated system. Colleagues at national meetings showed little tolerance for our ideas. Not real science they declared! Scientific journals did not know where to place our manuscripts. The Journal of Food Science rejected a manuscript after eight reviews. A typical process goes through two reviews. I contested the decision citing the two criteria of the journal:

No reviewer questioned the scientific merit of the research, so I could only conclude that the tomato was not a food. Based on that argument, the editor accepted the manuscript.

A graduate student spent a week out of state in the tomato patch to observe harvest operations. He learned that pickers avoided wearing any red or pick clothing that might reflect on the green fruit. They only picked ‘breakers,’ fruit that showed a hint of pink. Breakers start to ripen by generating ethylene on their own. Breakers qualify as vine ripes in the trade. Humans grade the tomatoes when they reach the packinghouse. These graders remove blemished fruit and those that are either too pink or not pink. Next, the facility boxes up the tomatoes for their trip to the wholesale warehouse. At this location more humans grade and sort the fruit for color and size. Then the tomatoes travel to local restaurants and independent or small-chain grocery stores. We followed the fruit from packinghouse to market with a mobile lab designed by Stan Prussia.

Ethylene-ripened tomatoes (gas ripes) are a whole different matter. Packers near the farm ship mature-green tomatoes that are hard as rocks. They will stay in the green stage for some time without ripening or rotting. Mature greens should not be refrigerated. Control of ripening is better with gas ripes than with vine ripes. Tomato ripening begins when exposing mature greens to external ethylene in special storage rooms. A catalytic converter generates ethylene from ethanol. Gas ripes maintain firmness as color develops, but flavor doesn’t follow. To be fair, vine ripes as described in the trade don’t develop much flavor either. Companies distributing gas ripes play the market, applying ethylene as prices rise. It is not clear whether harvesting tomatoes at the mature green or breaker stages is to blame for poor tomato flavor. Tomato varieties that withstand shipment appear to have poor flavor potential.

One of the tomato houses that dealt in gas ripes separated their tomatoes by automation. Their customers preferred similar color and size combinations. This operation was a feature on any tour I gave to an international visitor. I remember travelling up to the location one day describing the operation in detail. Imagine my shock when I arrived at the warehouse to find the automated sorter gone! Human sorters replaced this sophisticated piece of equipment. I received no satisfactory explanation for the change. 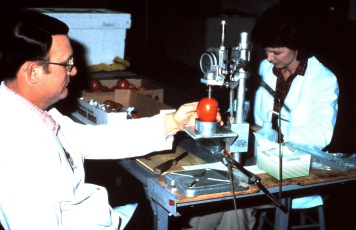 Ripening results in a rapid development of red color and softening. Supermarket shoppers look for red, firm tomatoes. They reject green or soft fruit. Yes, most consumers squeeze the tomatoes as they select the winners. There is only about a 2-4-day window for an individual tomato to pass this test. It may take a day or two for the bruising to become evident. A bruised tomato is a discarded tomato. Store profits depend on careful ordering and display by the produce manager.

The gentle art of grading and measuring. Stan Prussia, my engineering colleague, focused his attention on sorting, grading, and measuring firmness. He purchased a set of plastic balls that kids jump into in an indoor playground. Graders detected more defects when the plastic balls came straight at them. Almost all grading operations view fruits from each side of the grading belt. In another study we observed that presorted tomatoes resulted in a similar number of culls as a batch that was not presorted. Human graders appear to remove fruit based on percentages rather than severity of defect. Firmness is such an important quality characteristic. Stan sought a better way to measure it. At his annual eye exam, he marveled at the laser puff test. He wondered how it would work in measuring firmness of tomatoes and peaches. It worked well, and we used it from that time forward.

What is the perfect tomato flavor? First, there is no perfect tomato flavor. There are at least two major segments in preference. One group likes tomatoes with higher levels of sugars AND acids. Note, for sweet fruits, sweetness increases as sugars increase and acids decrease. Another group prefers a tomato with more aromatics. There may be a third group that values both. A foodie may show a preference for one line of characteristics. Backyard gardeners and supermarket shoppers have other preferences. Connoisseurs of heirloom varieties represent another flavor segment, and they have their favorites. And it gets even more complicated! Not enough of those aromatics represent under-ripe flavor. Too much of the same aromatics represent over-ripe flavor. There is only a narrow window where it all comes together.

A winter tomato has a built-in disadvantage when compared with a summer tomato. Daylength affects development of tomato flavor. Some color compounds also contribute to flavor. The yellow-to-orange-to-red carotenoids are important in both flavor and color. Some of these carotenoids need more sunlight to develop. Light not temperature is the critical factor.

Sensory and consumer testing. Evaluations of tomato flavor are intricate. We conducted many of our sensory tests with trained descriptive panels. These panels identified and measured specific aspects of tomato flavor. Panelists distinguished between different types of tomato flavor. A typical descriptive panel has 8-10 trained evaluators. Temptations exist to fine-tune testing to the point that results become theoretical and not practical. Some tasters detect very small changes in taste or aromatic components of flavor. Others are not as sensitive. To test individual aromatics, we added them in one at a time to a deodorized base of tomato pulp. In other tests we had panelists put on nose clips to screen out the aromas and focus on taste.

A descriptive panel is not able to identify the best tomato flavor. A consumer panel needs at least 30 members, but more than 100 panelists is preferable. One collaborator identified 45 different characteristics related to tomato flavor. They wanted me to identify the perfect tomato flavor with my acceptability testing. The acceptability scale is very coarse, and the 45 characteristics are very fine. Coarse measures expressed as a function of fine values produce nothing but garbage.

Bottom line. Why is it so hard to find a flavorful tomato in the supermarket? It must arrive not too soft nor too red. The variety must have full-flavor potential and survive shipping. That flavor must match consumer expectations. Remember it has only 2-4 days to remain acceptable. There is no guarantee that peak flavor will match acceptable color and firmness levels. That is a lot to ask of a delicate fruit.

What is the best way to get a flavorful tomato? Select a favorite variety and grow it in the backyard. Growing tomatoes requires waiting until the first one ripens.  Then we must find someone to take excess fruit off our hands. There is only so much salsa etc. that one can put by. Better yet, live next door to someone who grows delicious tomatoes. My neighbor Henry supplied us with succulent tomatoes for at least 10 years. Nothing like a ripe, tuna-stuffed tomato! Farmers markets might supply our needs. I never found one, though, that could compete with Henry’s tomatoes. When they are out of season, find something else to enjoy. Then spend the next few months anticipating the first tomato off the vine next season. I find that grape tomatoes are good enough for salads out of season but not for stuffing with tuna.

Next week: What I learned about peaches during my research career