Should food scientists consider Harvey Wiley a hero who used science to make food safe? OR was he the man who fought valiantly to get chemicals out of our food but failed? Based on the limited introduction to his work in my Food Science classes in college, I considered him to be a hero. Now books like The Poison Squad by Deborah Blum have cast him not only as a crusader for pure food, but a skeptic of any chemical food additives. Note that Blum is a serious science journalist who has been awarded a Pulitzer Prize for her science writing and is a Fellow of AAAS. I listened to her interview on NPR about this book and looked forward to reading it to learn more about Harvey Washington Wiley and the founding of the FDA. Some of my key responses to quotes from the book in bold print are shown below:

“We tend these days to cast a romantic glow over the foods of our forefathers. In such a rosy light, we may imagine grandparents or great grandparents thriving happily—and—solely—on farm-fresh produce and pasture-raised livestock.” With these first two sentences, the author had my full attention as she set the tone for her book. Even before this statement, however, Blum provides a cast of characters and their roles in this story spanning nine pages worthy of a Tolstoy novel. I referred back to this list many times during my reading to better understand the narrative. Life on the farm in the early 20th Century was not what many of us imagine. Food available in the city at that time was a risky proposition. Life expectancy in US in 1906 at passage of Pure Food Act was 47 for men and 51 for women.

“We may even believe that they ate and drank in a world untouched by chemically enhanced and deceptive practices of today.” Wait a minute! Before I had even completed reading her first paragraph I was conflicted. Are we victims of chemically-enhanced food products and deceptive practices today? Were all Wiley’s efforts in getting the Pure Food Act of 1906 passed and the FDA established for naught? To her credit, Blum points out that our food supply today is much safer than it was in Wiley’s time, but I did not find her reassurances to be that comforting. Rather than portraying him as a hero for food scientists like me, I found Wiley described as someone who would be leading the charge for removing the supposed dangerous chemicals found in processed food today. I expected more from a noted science writer who is not afraid to take on Dr. Oz about arsenic in apple juice. From this quote and much of what I read in the book it seemed that she equates food safety and the absence of chemical additives.

“He emphasized that it was the ability to make a cheaper product—not safety, not quality—that drove the industry’s embrace of industrial food chemistry.” Sounds familiar, doesn’t it? I must admit that many companies of Wiley’s day engaged in nefarious practices, but Wiley did pair up with responsible canning companies to use a new science of the times, bacteriology, to improve the safety of canned foods. This effort is clearly documented in Canned by Anna Zeide, but it is completely absent in The Poison Squad. I was not around 115 years ago,  but I firmly believe that industrial food chemistry is critical in maintaining safety and quality of food products today. Cured meats like bacon and pepperoni are not safe from botulism without the incorporation of nitrates, whether in the form of sodium nitrate or as a natural component of celery powder. Antimicrobials like lactic acid keep fruits and vegetables from rotting, a major cause of loss of quality and food waste. Antioxidants such as sodium ascorbate and BHA or BHT keep fatty foods from oxidizing and developing off flavors and toxic lipid hydroperoxides. 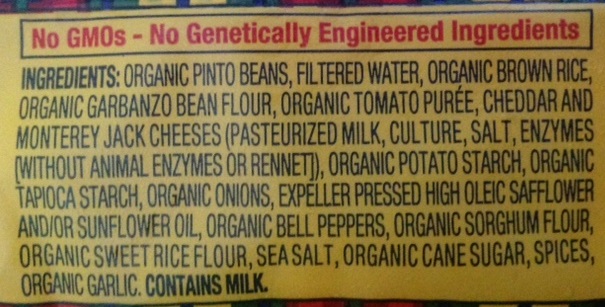 Ingredient statement for Amy’s Cheddar Cheese Burrito made with organic beans and rice.

“Wiley, always a stickler for accuracy (a trait that would over the years irritate more plainspoken colleagues, including President Roosevelt), thought the corn-based product should be called glucose or glucose syrup.” He would not have liked the terms corn syrup or brown rice syrup or any other syrups with the exception of maple syrup. His terminology would have greatly reduced the number of sugar products on the market. It makes me wonder what he would have called high fructose corn syrup. I suspect that he would not have been amused labeling any plant-based product a milk, burger or meat of any kind. I wonder what he would have thought about organic foods. Wiley had credibility with Theodore Roosevelt until he had the gall to demean saccharin in front of the President. It turns out that the Presidential physician was recommending saccharin as a sugar substitute to Roosevelt, and the comment was not appreciated. This single disagreement may have been a factor Wiley’s termination of government service.

“Wiley may have seen, at last, in the new agency that ‘more perfect’ regulatory structure he’d hoped would arise from the 1906 law. He also would have undoubtedly continued to harangue the FDA to pursue even more perfect protection of his fellow citizens.” This statement is about how he might have reacted to the difference between the 1906 law and its successor, the Pure Food and Drug Act of 1936, enacted six years after his death. If given a chance to visit us in the 21st Century, it is not clear how Wiley would react about the food supply and the country in general. If Blum’s portrayal is accurate, and I have no reason to believe it is not, he would probably be troubled by the industry’s continued reliance on chemical additives today. He would also most likely be troubled by the clean label movement as companies try to hide sophisticated chemistry behind a disingenuous attempt at label transparency.

I suspect that Wiley would be amazed at the myriad of food products available to us now and the advances in public health since his death. He would probably have difficulty wrapping his mind around the shift from widespread malnutrition as a major public health concern to the obesity epidemic and associated chronic diseases we face now. Based on photos of the man, he was definitely overweight if not obese. I’d like to think that he would be pleased with today’s FDA, but he would have some ideas of how it could be improved.

“We have succeeded in a protective system that at best protects all of us impartially. But it’s our responsibility to value and maintain that system.” It is hard to understand what kind of a grade that Blum would give the current FDA. I feel comfortable that she would assign an A to Wiley and probably a C to Teddy Roosevelt. This statement implies that FDA would be in the B range, but some of her comments on chemicals in foods might give it a C. I believe that the FDA and other governmental agencies do a good job at protecting us from dangers in our food supply. I would give them an A. Life expectancy today is 79  which represents an increase in life expectancy by 30 years (or 60%) since passage of Pure Food Act of 1906. I understand that advances in medicine are largely responsible for such an increase, but the data suggest that reliance on ultraprocessed foods in the American diet is not contributing to major decreases in life expectancy in USA.

The author expresses concerns about rollbacks in regulations at the FDA and EPA by the Trump administration and its overly friendly relationship with industry. I share those concerns. I also have concerns about a political movement that wishes to eliminate many chemical additives in food without a basic understanding of scientific principles. The FDA has, in my opinion, done a remarkable job since its inception of keeping politics out of its operations despite pressure from many sides. The Poison Squad is a good book and well worth reading for anyone interested in the early history of the FDA. I just wish the author could have spent a little more time on how the modern FDA takes the ideals of Wiley to ensure a safe food supply today. Food safety is not only about the chemicals!

2 thoughts on “The Poison Squad: One Chemist’s Single-Minded Crusade for Food Safety at the Turn of the Century”