From an academic view of diets and obesity last week, we proceed to a solution offered by a physician in the trenches intervening in cases of overweight and obese individuals. Yoni Freedhoff gives us a very different perspective on the topic in The Diet Fix. First, he doesn’t believe in diets designed for weight loss. They may work for a time, but in the end such diets are doomed to failure. This author counters Mike Gibney, who suggests that it is harder to cure obesity than cancer in Ever Seen a Fat Fox?,  with a “simple” approach to weight loss. Although some of what Freedhoff prescribes in The Diet Fix is conventional, he offers some rather unconventional advice that is neither radical nor inadvisable. I follow his website which mixes advocacy, updates on the latest obesity research, and various political perspectives that go well beyond diet and health. Responding to the author’s own words in bold:

“your goal is to live the healthiest life you can enjoy, not the healthiest life you can tolerate.” This statement reveals the guts of Freedhoff’s plan. He runs a weight-loss practice with the catchy moniker of BMI (Bariatric Medical Institute). The author has studied what works for people who have overcome excess weight in their life and rejects the idea of a “diet,” calling his solution a lifestyle. Like many such plans it sounds good when you say or read it real fast, but it does not appear to be nearly as simple as it seems at first. I suspect that it takes a particular personality type to be successful on his regime, but the approach is probably an excellent one for strong self-disciplinarians. His plan calls for strict record keeping and weighing of all food before it enters the mouth.

“Calories are still the currency of weight,” Like Gibney, Freedhoff believes in calories. Everything in his lifestyle plan is measured in terms of calories and energy balance. All calories consumed must be accounted for in a food diary. Such accountability is what  many “dieters” hate about diets, but Freedhoff assures us that the procedure becomes routine after a while. Unfortunately, participants are never released from this regimentation. I support his embrace of energy balance in accounting for weight up to the point that he declares that some calories (from processed food, for example) may be more equal than other calories. He obviously has biases against processed foods, and I can live with that. He ventures into shades of Animal Farm, however, when he starts making exceptions to the rules that are rigid elsewhere throughout the book.

“Capital F food is actual food.” “Lowercase-f food is the heavily processed stuff. It is the stuff that has dozens of ingredients, many of which you can’t pronounce.” Although the Diet Fix allows us to eat anything we want, the author divides items into good-guy Foods and bad-guy foods. One would expect that someone with a name like Yoni Freedhoff would be wary of judging a word by how it’s pronounced, but apparently not. Food writing using chemistry as a way to scare people not as a way to teach is not worthy of a serious professional. Tamar Haspel suggests that chemical additives are generally safe but are being used as a convenient proxy against processed foods. I can respect the author’s concern about overeating foods with too much sugar, fat or calories, many of which are processed. By stooping to such language, however, he diminishes his credibility as a physician with a background in nutrition. Unfortunately, he doesn’t stop there. 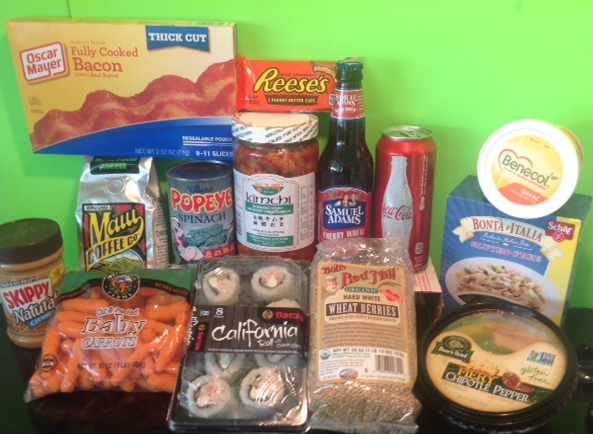 Which of the foods shown above are Capital F foods and which are lowercase f foods?

“She cut out processed food from her life, began carefully reading food labels and ingredient lists, and focused on a diet consisting of lean proteins and complex carbohydrates.” Freedhoff is referring to Tosca Reno who is credited with starting the the “clean eating” movement. This statement is one of those that drives me nuts! Why is she reading labels if she is cutting out processed food from her life? If a food has an ingredient statement and Nutrition Facts label, it is a processed food in my mind. A fundamental principle behind my blog is that processed foods are widely condemned but poorly defined. The vagueness of such a description allows individual consumers to classify bad-for-them products as processed and not-so-bad-for-them foods as not processed. A study (1) actually developed definitions for highly and moderately processed foods, but these definitions probably do not coincide with the concept most Americans have with processed food products.

“To navigate this world’s dietary indulgences, a person needs to switch gears from being blindly restrictive to being thoughtfully reductive.” The author avoids rigorous guidelines on what we can and cannot eat, but we must be willing to take responsibility for our actions and their consequences. We are in control of what we eat, but if we eat too much food, particularly the wrong kinds of foods we are not going to lose the weight we want to lose and could even gain weight. It is back to the goal of living the “healthiest life you can enjoy.”  Thus, there are tradeoffs we need to be willing to make. We can treat ourselves and eat what we want, but we need to be conscious of how much we eat and be willing to impose limits on ourselves if we want to live a healthy life. Formal diets are necessarily restrictive, but in the long run such regimes do not work because we eventually become resentful. Once any “diet” is completed, then we are likely to return to old ways that will result in regaining the precious pounds we lost.

“The good news is that with a focus on increasing protein, and well-timed meals and snacks, hunger can be prevented with what I call ‘preemptive eating’ eating before you ever let yourself get hungry.” One of the reasons Freedhoff gives for lack of success with diet plans is that such plans have no techniques to ward off hunger. A key component of his approach is the encouragement of planned, protein snacks. I have not come across such a prescription in reading other diet books. The reason for protein snacks is that they give the most filling action for the least calories. The problem with most diets is that we try to restrict ourselves too much leading to mini-binges throughout the day. Such a practice does not relieve us from restricting calories in the long run. Failure to watch calories will defeat our goal to lose weight or maintain the “healthiest life we can enjoy.” These protein snacks are a unique, but tricky aspect to his Diet Fix.

“Eat out more than once or twice a week and losing weight that week’s going to be a challenge.” Here is the kicker, we can’t expect to eat away from home on any consistent basis and maintain that healthiest life. To maintain that healthy fox image Gibney describes, Freedhoff suggests that we need to cook at home or find someone who will prepare our food for us who is just as concerned as we are about maintaining a healthy lifestyle. To Freedhoff, purchasing meals outside of home, restaurant or processed, is a primary cause of obesity. This advice could be perceived as just another man telling women that they need to cook more. My kitchen has been down now for nine weeks due to a home renovation with little hope to prepare real meals for several weeks ahead. I have been able to maintain my healthy life while subsisting on take-away or processed food and an occasional meal cooked in a toaster oven, but it is a very difficult proposition.

The Diet Fix does offer a unique set of guidelines on how to lose weight and keep it off. As one might expect, the practitioner in the field who deals with motivated, overweight individuals provides a different perspective from the academic view described last week. I have no doubt that a highly motivated person with a personality amenable to regimentation could find an answer to a weight problem following the guidelines presented in this book. Unfortunately, such an approach takes willpower to overcome the temptation of widely available processed and restaurant foods. In two weeks, I will compare and contrast the perspective of the fat fox with a diet fix and my take on the subject of diets and obesity.

Next week: Eat Fat to Burn Fat? The Skinny on the Ketogenic Diet

if organic produce is really worth the price premium.

6 thoughts on “The Diet Fix: Why Diets Fail and How to Make Yours Work”

What to drink and how to think for every Level of Fatigue.