I first met Jeff Dorfman when he was challenging a specific part of the Strategic Plan proposal for our College which I was defending. After much discussion, some of it heated, we were able to hammer out a better plan than either one of us had envisioned. It was not the only time we ever disagreed. In light of the Harvest Box controversy, I thought it would be instructive to get the opinion of a noted economist on how food aid should be distributed by the government.

The U.S. government has several large food assistance programs. The largest is SNAP, the Supplemental Food Assistance Program, commonly known as food stamps, which serves over 40 million Americans per year. This is supplemented by the School Lunch Program, offering free and reduced price lunches and sometimes breakfasts to 30 million school children during the school year, and WIC, which provides assistance to about 7 million pregnant women and their very young children (ages 0 to 4). Given the federal spending for these programs runs roughly $100 billion per year, we should all want them to be as effective and cost efficient as possible. This leads to the question: how should we deliver food assistance to those in need?

To those who have already figured out that the federal government rarely does things in the best possible way, it should be no surprise that even the government itself hasn’t settled on a single, best approach. SNAP is the least restrictive, providing monthly benefits in the form of a pre-paid debit card, and allowing the purchase of virtually all food products that are not prepared food. That means no rotisserie chicken or premade sandwich, but luxury foods and non-nutritious foods are generally okay. The WIC program provides highly restrictive benefits, where the aid can only be used for specific products, right down to a specific brand of baby formula. This allows the government to negotiate with suppliers for the best prices and makes sure the food is nutritious, but also reduces the usage of the program by those qualified to receive benefits.

Nonperishable staples in a local supermarket offering a wide range of choices.

Is this important? It is if your goal is providing food assistance to those in need. According to a recent study by Jane Furey, Jacob Klerman, and Todd Grindal, the SNAP program is used by 83% of eligible households, while the more restrictive WIC program only has 63% of eligible women and children enrolled. Further, 97% of all SNAP benefits get spent, while only 83% of WIC benefits are redeemed. That means SNAP is providing about 80% of the maximum feasible food assistance it could by law, while WIC is only reaching about 50% of its potential. Clearly, if you want people to get more food, placing fewer strings on what food they can have helps.

This is particularly relevant at the moment thanks to President Trump’s proposal to reform the SNAP program so that a share of the benefits would be delivered not on a debit card, but as an actual box of food, with all the food products in the box being nutritious, American-grown products. The food in the box would generally be very shelf-stable, processed foods to minimize spoilage during the distribution of the boxes. This proposal is likely going to be completely ignored by Congress, and it should be, as research shows that it would be less effective at reducing food insecurity and likely less cost-effective than our current food assistance programs.

Economists will all tell you the best gift is cash, because the recipient can spend the money on whatever she most wants. If you buy a present, the best you can hope for is to pick the exact same thing the person would have, meaning a tie for effectiveness. Any other present and you did worse than if you gave cash. Cash cannot be beaten. Yet government welfare programs add lots of restrictions when support is provided. SNAP can only be spent on food; we provide health insurance, rental assistance, heating assistance, lower cost cell phones, and on-and-on through a list of about 100 federal welfare programs that provide benefits which are either definitely not cash or can only be spent on certain products. Only TANF, Temporary Assistance for Needy Families, and unemployment payments show up as unrestricted money. 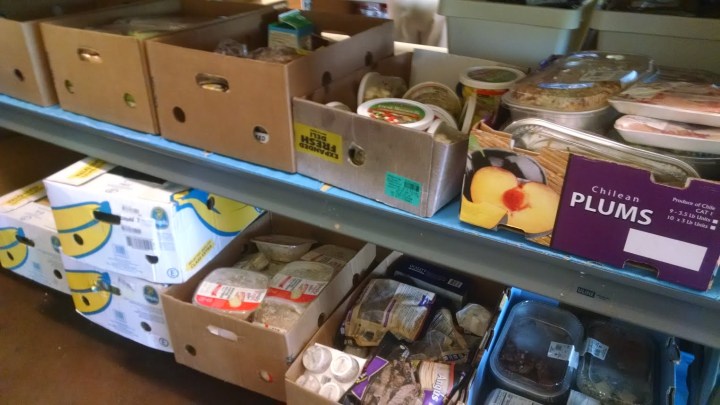 Perishable foods ready for distribution at a food pantry offering a narrower range of choices.

Government adds all these restrictions because it doesn’t trust poor people to spend the money the way government thinks they should if simply handed cash. This condescension toward the poor is unfortunate and means that taxpayers spend more money in order to do less good. Boxes of food instead of money to spend on the food of your choice is, therefore, a step in the wrong direction.

People get less usefulness out of restricted benefits (SNAP benefits are no good to me if my car needs fixing), which explains much of why more restrictive programs like WIC have lower participation and usage rates than less restrictive ones. I hate peanut butter, so a jar of peanut butter in my food box will not reduce my hunger or boost my nutrition. When you consider the wide range of tastes and preferences, allergies, and health conditions to be found among the over 40 million people receiving SNAP benefits, there is no way to deliver food boxes that will not contain products many recipients either cannot or do not want to eat. A lot of food will be wasted.

Wasted food is bad on its own, but it is much worse when the point of the food distribution was to alleviate food insecurity. If less food is eaten, and given the much higher distribution costs that would be incurred in assembling and distributing boxes of food instead of electronically loading money onto debit cards, it seems almost guaranteed that the cost effectiveness of the SNAP program would be diminished. We would get less hunger-reduction per dollar spent, and that is not good from either an economic or a human perspective.

SNAP is one of the better government programs, proven to reduce hunger and improve health outcomes. Part of its success is that recipients can choose food they like, that fits the needs and desires of their family. Trying to micromanage the lives of poor households by handing them a box of food might seem like a good idea in a “Father knows best” kind of way, but the reality is it will increase hunger in America and mean that SNAP will provide less bang for the buck for every taxpayer dollar spent. SNAP already works, and while I am sure improvements are possible, this proposed policy would not be helpful.

Jeffrey Dorfman is a professor of agricultural and applied economics at The University of Georgia, a senior fellow at the Georgia Public Policy Foundation, and a regular contributor to Forbes and RealClearMarkets.com.

3 thoughts on “How should the U.S. deliver food aid?”