Last year I signed on for 20 weeks of fresh veggies. Every Wednesday I would pick up a box of fresh veggies to cook up for our meals. This year, upon the recommendation of one of my faithful readers, I decided to try a meal-kit solution from Hello Fresh. The best part of last year’s experiment was the number of unfamiliar vegetables I encountered and learning how to cook them. It was also an interesting experience planning my evening meals around veggies rather than around meat. The problem was that there were too many veggies coming into my home each week. I was not finished with previous week’s box before a whole new one arrived. These veggies were also much dirtier than those available at the farmers market or grocery store much to the dismay of my wife when she opened up the refrigerator.

Cooking at home is not as easy as it might seem. Meal-kits help simplify the process, but not as much as one might think. I started by going online and registering for the Classic Plan and selecting my preferences. This plan offers eight selections each week from which I chose three meals for two people. The other options are a family pack (three meals a week for four people) or a vegetarian option (three pre-selected meals—no options). A gentle reminder arrives each week by email to either choose my meals for the following week or to skip a week. I was active on the program for five of the ten weeks of my trial. One week I chose the vegetarian option instead of the Classic Plan.

My Hello Fresh box arrived each Tuesday afternoon, usually allowing enough time for me to prepare one of the dishes for that evening’s meal. One week I had to go to a backup plan when the UPS truck arrived later than expected. Upon opening the box each week, I found three bags–one for each meal. Any meat or cheese was located in a compartment underneath the bags protected by two frozen pouches. Each box also contained recipe cards for the three meals and nutrition facts statements for all of the eight meals offered that week. My initial reaction was being somewhat overwhelmed. The estimated prep times for most meals were much shorter than I was able to accomplish. Most of my early meals were not on the table when my wife arrived home to eat. I was able to overcome this problem by starting earlier and becoming quicker in slicing and dicing.

I highlighted seven ways of viewing processed food in my book, In Defense of Processed Food. Here is my assessment of the meal-kit experience in some of those and other dimensions.

Fresh and local. Many of the ingredients shipped were fresh but many were not as can be seen in the photo below. My boxes were flown into Jacksonville International Airport presumably from California. Thus each box flew across country and then traveled across Florida for at least 350 miles by land in the back of a truck. Such a journey does not count as local for me.

Chemical free. Processed items in the box contained ingredients that sounded like chemicals and may be hard for third-graders to pronounce. I also learned in my horticulture courses that fresh fruits (like lemons that appeared in my box) and vegetables (including the grape tomatoes, onions and zucchini shipped to me) are made up of a host of natural chemicals. I am under the impression that all foods and ingredients contain chemicals and that processed ones have fewer chemicals as manufactured foods are less complex than natural ones.

Real food. I like to think that what I eat is real food whether it comes in a box from Hello Fresh or in a package from the grocery store. I suspect that my great-grandmother would be more likely to recognize my regularly prepared meals and ingredients than those that came from Hello Fresh. 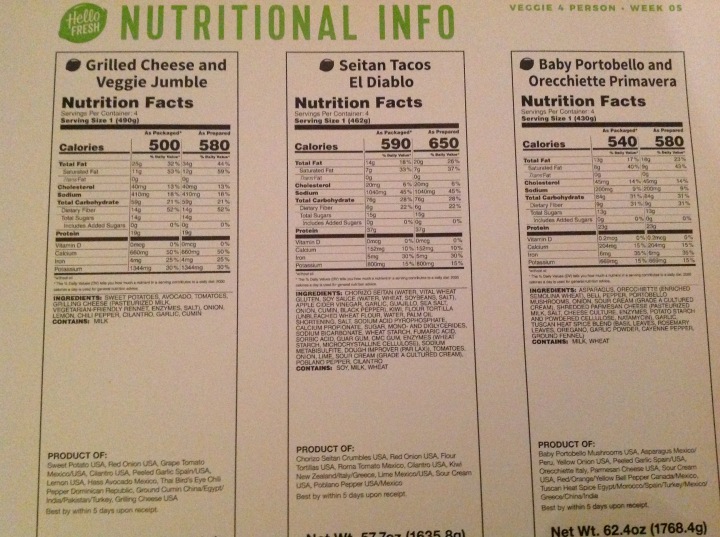 Nutrition. One thing I really liked about the meal-kit boxes was that they came with recipes and Nutrition labels. It is difficult to track the nutritional information in a home-prepared meal made from several ingredients. Sugar tended to be low in meals from the boxes, but salt varied widely from meal to meal. In some cases, sodium approached or even exceeded 50% of daily value in a single meal. I found that many of the meals produced three servings (an extra lunch for one of us) than the intended two.

Safety. Hello Fresh did a nice job of keeping the meats safe by the ice packs and insulation. Part of that was through the use of vacuum-packed ground beef and chicken. For food scientists like me, safety is the most important dimension affecting my food choices. 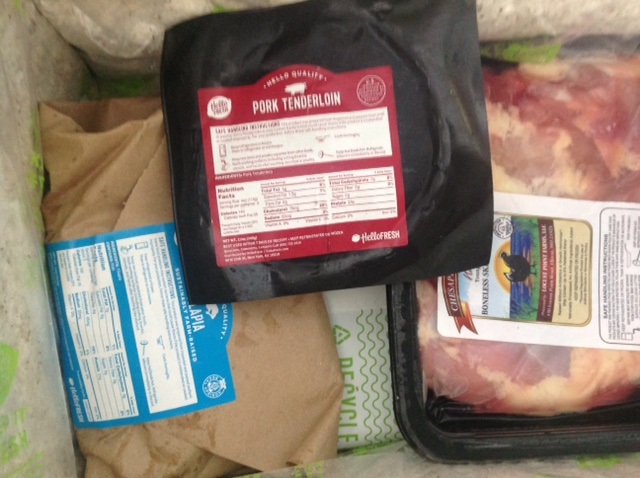 Sustainability is harder to assess. There seemed to be a large amount of packaging waste, particularly the insulation. It was not clear what we were supposed to do with the frozen gel inside the white plastic that kept the meats cold. I did not want to put it down my drain or throw it out on my lawn. Having small containers with carefully measured ingredients minimized food waste but at the cost of the accumulation of many small bottles.

Quality and convenience. The quality of the meals was good, but not great. Only one recipe will be part of my repertoire going forward, Creamy Dill Chicken. The tomatoes were chilled and as such flavorless. The ground beef did not stick together enough to form a nice patty. My wife and I found the meals to be repetitious after a few weeks. Of the 15 meals I prepared, five featured green beans, five contained potatoes and three incorporated sweet potatoes. The kits were very convenient having the ingredients for three meals shipped to my doorstep every week, saving me at least one trip to the market. Meal prep was a hassle as mentioned above. 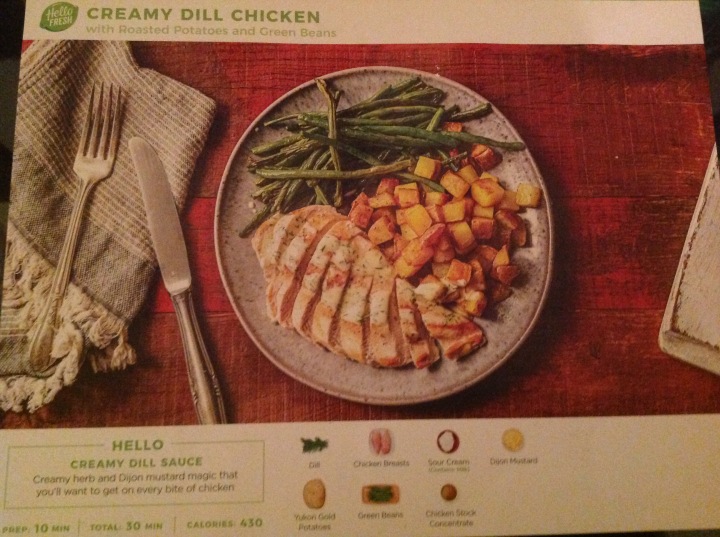 Expense. The meal-kit was more expensive than preparing my own meals, even considering my travel to and from the market. I am able to do some of my shopping by bike and most of my automobile trips combine several tasks. I must admit to being spoiled once I realized that it was going to take more time to prepare a meal that what appeared on the card.

Cancellation of the service

After about the tenth time I was asked when my experiment with meal-kits was going to end, I decided I would cancel the service. Ideally for me, it would be nice to have one week a month with a meal kit, but I try to please both of us I cook for. I am not sure I could afford 52 weeks a year of Hello Fresh charges on my card. I grew up with potatoes at every meal, but I rarely have potatoes with my meals now, preferring whole grains like bulgur, couscous and brown rice. I found the vegetarian offerings to be excellent and would probably choose them at least three times a year if I were to continue.

I am glad that I tried Hello Fresh. Thanks, Sara, for the suggestion. When I compare my experience with the veggie boxes, I would choose the veggies if I could get half a box each week or find someone to share a box. Unfortunately, there is no comparable grower at our local farmers market, and I refuse to travel the 103 miles each week to purchase the equivalent of half a box from this organic farmer. I suspect that I will try another experiment on alternative eating at the end of the year. Any suggestions from my readers?

Next week: American Capitalism and the Science of Scaling

3 thoughts on “My personal experience with Hello Fresh”

Your guide to caffeine, energy drinks, and beating burnout.