Helping me make it through the aftermath of a tooth chipped during my Thanksgiving meal.

Ingredients in foods perform specific roles just like actors. For example Leonardo DiCaprio played a young man who went down on the Titanic and a fur trapper in The Revenant. Food scientists call the roles ingredients play in foods functional properties. Depending on the food product, ingredients can play different functions or roles. As I described in my previous post, carboxymethylcellulose and polysorbate 80 have been called out as “creating a favorable niche” 1 for development of cancer in mice. These two additives can function as emulsifiers and as surfactants. Emulsifiers allow the mixing of oil and water; surfactants reduce the surface tension between a liquid and a solid. In this post I will try to explain what is happening in the study that is causing such concern about emulsifiers in foods.

This blog is designed to be non-technical and jargon-free. Unfortunately, to help explain what went on in the study 1 that has caused the recent uproar I will need to get more technical than I would like. The experiments described used a cancer challenge technique in mice susceptible to this procedure2. The challenge is called AOM/DSS 3. AOM stands for azoxymethane and DSS for dextran sulfate sodium. AOM is the carcinogen and DSS creates an inflammation in the colon making it easier for the AOM to induce cancer. Last week I posed a series of questions to better understand what is happening. Those questions follow in bold type with my answers, as I understand the study, in normal type. I must emphasize that I am not a cancer specialist. As a food chemist, however, I do understand how emulsifiers and surfactants work in complex chemical systems such as processed foods, whole foods and the contents of the stomach and intestines during digestion.

Are polysorbate 80 and carboxymethylcellulose “creating a favorable niche” as random effects of two compounds based on their status as emulsifiers or on another property such as surfactants? The results of the study1 make it fairly clear that these changes were not random but due to the physical properties of the two additives. The authors of the study suggest that the emulsifying properties of CMC (carboxymethylcellulose) and P80 (polysorbate 80) were to blame. Since fatty acids form complexes with DSS4, it is entirely possible that an emulsifier could work in a similar fashion and even enhance the interaction between AOM and the intestinal linings. OR the “favorable niche” could be the result of better attachment of AOM to the linings due to reduced surface tension provided by the surfactant role of CMC and P80. It is important to note that AOM/DSS was injected into the mice and that the emulsifiers/surfactants were added to the water that the mice drank1.

Will natural emulsifiers like egg yolks do the same thing? If emulsifiers are the true culprits that make the AOM/DSS challenge more effective at generating tumors, then can we expect natural emulsifiers to be just as effective as compounds like CMC and P80? Natural emulsifiers include lecithin which can be isolated from soy, other plant materials or egg yolks. Natural and synthetic emulsifiers are chemical compounds in which one part of the molecule is soluble in fats and oils and another part of it is soluble in water. Think of the contents in the stomach, best visualized as the pinkish/yellowish glop of fresh vomit. There is no distinction between natural and synthetic emulsifiers in the stomach—merely a simple chemical interaction that links the fatty or oily molecules with watery molecules by the emulsifier.

Is the interaction described due to the additives making the carcinogens more potent or the gut microbes and the intestinal linings more susceptible? The most likely explanation is that the DSS causes the colon to become inflamed making the intestinal linings more susceptible to the AOM carcinogen. Apparently emulsifiers make it easier for AOM to bind with the linings and generate a tumor because the AOM/DSS complex involved binding of fatty acids. That means that a carcinogenic system that is free of fatty acids would not be enhanced by CMC, P80 or other emulsifiers but may be enhanced by other common classes of chemicals. To determine if the results are due directly to emulsifiers, researchers should use a different cancer-challenge system, preferably one that does not involve fatty acids. Since I am not a cancer researcher, I do not know much about such systems, but I do understand the properties of natural and synthetic emulsifiers. The results also indicated that the emulsifiers affected the types of gut microbes and their ability to increase tumor development in the presence of AOM/DSS, but not in their absence. The link between microbial changes and the development of the tumors was unclear and required the connection of too many dots. I am not convinced from their explanations that gut microbes were directly involved in tumor development.

Does the addition of the two compounds to water work the same in our guts as their presence in food after digestion or are the results merely due to experimental conditions? Unfortunately, I am not really sure what the mechanism (the series of steps from injection of AOM/DSS to development of a tumor) this specific challenge undergoes and how the mechanism is changed when an emulsifier is present. I do understand that the additives were added to the drinking water of the mice. Thus, one of the emulsifiers could have been present in the colon without being present in the mouse chow or digested food. Presumably these additives were free to interact directly with AOM, the microbes or the intestinal linings. Molecules like lecithin, CMC or P80 that are present in food would probably  interact with other components in the digested food and thus be less likely to bind with AOM, the microbes or intestinal linings. That is why it is very important to understand the mechanism of action in this challenge and how the emulsifiers are working.

Are these results applicable to humans in a similar way they are to mice? If so, should they be removed from processed food? Mice and other lab animals are used to study medical questions that would be either unethical or very difficult to study in humans. Inducing cancer in human subjects would certainly be unethical. Testing of potential carcinogenic chemicals in mice is an early step in the testing of individual chemicals to see if concern is warranted. This study suggests that further steps should be taken to see if these two compounds, or more seriously, all emulsifiers should be banned from processed foods. It is critical, however, that we know how (the mechanism of action) the two chemicals tested lead to an increased number tumors. Results of experiments with mice can give us an indication of what could happen in humans, but further testing is needed before any drastic action is taken by the government.

From the information I have read to this point I conclude that more research is needed to see if CMC, P80, synthetic emulsifiers or all emulsifiers can increase our chances of getting cancer. Note that none of the articles mentioned here or in my previous post accuse CMC or P80 as being carcinogens with the exception of the misleading headline in the Time article. To satisfy me as a food chemist, the researchers need to demonstrate that more tumors will actually develop in the presence of CMC, P80 or other emulsifiers and surfactants present in processed or whole foods. An equally compelling explanation is that emulsifiers or surfactants make this particular challenge more effective, but that the results have no relevance to the presence of these chemicals in food. Even though I have not found the presence of CMC or P80 in any of the foods I normally eat, I have no qualms of eating any processed food with either ingredient or any other natural or synthetic emulsifiers in my foods. 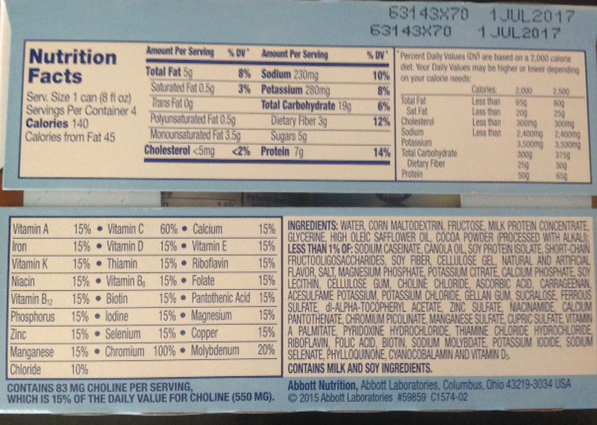 Can you find the emulsifiers on the Glucerna label?

Next Week: Are carbs the new fat?