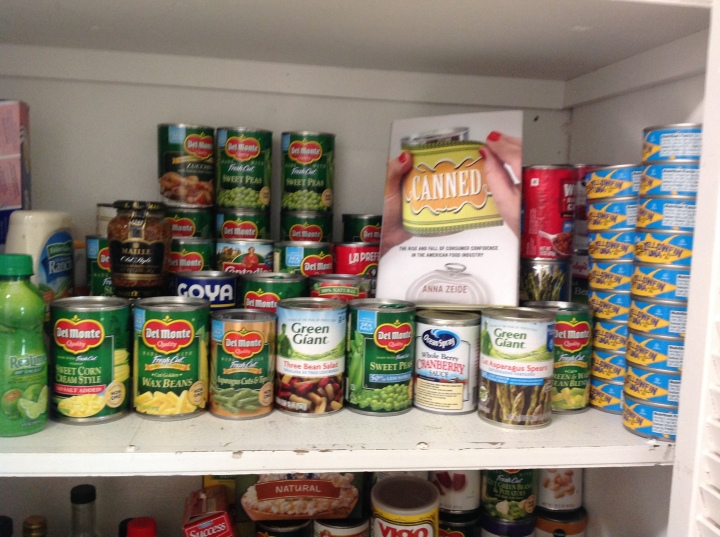 Science is not always right, but what becomes the arbiter between opposing positions if scientific knowledge is ignored? Science has become very political. It is proclaimed as proof if it supports a specific position and is ignored if it does not. A single study can neither confirm nor refute a particular point-of-view. Results from scientific studies must be evaluated on the strength of their methodologies and in context of the overall pattern of results from many different studies. One of the most important aspects of a graduate-school education is the development of critical-thinking skills in evaluating research results. Critical thinking does NOT mean rejecting results that disagree with preconceived ideas. It DOES mean understanding how the results match with the methods and in context of the larger body of knowledge of the field. In the last of a four-part series stimulated by the book Canned, I advocate for a middle path between the food movement and Big Food. Once again, in her own words, Anna Zeide comments on the reach of the food industry:

“But the kinds of research that canners have embraced in the last half century focus less on the technical than on the social—less on the problem itself than on the managing the perception of the problem.” Contrary to my previous comments, I agree with this direct quote from Canned. The problem is that while we agree with the words, it is not for the same reason. It is “the problem itself” that is the sticking point. We both agree that Big Food is too focused on marketing and too little on technical aspects of the food. Zeide suggests that the problem lies in industry’s lack of concern about the safety of the food supply. I contend that the problem is the industry chasing the latest trend while marketing to consumer hopes, fears and biases. Major premises of the food movement appear to be based in advocacy rather than on scientific evidence. Meanwhile, the food industry works to make each product look less processed and less threatening to its critics. The movement and Big Food are thus engaged in a war that benefits both camps.

Zeide and the food movement want to “change the institutions that feed us.” Such changes must be planned carefully or resulting policies could do more harm than good. What institutions would feed us if not agriculture, the food industry and food-service outlets? How might each of these monoliths be modified to improve the health of Americans.

Let’s start with the farm. Government could limit the size of each farm and thus eliminate corporate farming. It might also subsidize the growing of fruits and vegetables for the fresh market and halt all subsidies on grains. Then synthetic pesticides could be banned, and all food would need to be organic. In addition, state and local governments should promote farmers markets while levying more taxes on supermarkets. Next, we would need to go after the middleman. Perhaps the most important middleman is the long-distance trucker. Barriers could be set up making it more difficult and costly to transport goods across state lines. Wholesalers would be replaced by co-ops or ther non-profit organizations that could emphasize locally grown food. Current regulations to limit food deserts would also need to be strengthened.

In addition, the federal government could go after food manufacturers Those laws should force food companies to destroy or at least deplete all unhealthy foods and make only at least moderately healthy foods. Limiting the size of food companies would be a good first step. Next, all ads by food companies could be banned and the number of public service announcements for fresh fruits and vegetables might be increased. Every processed food that lists more than five ingredients would be carefully screened by the FDA which could be renamed the HFA (Healthy Food Agency). Any unhealthy food would be declared illegal and moderately healthy foods could be taxed to decrease consumption while applying the proceeds to reducing the price of fresh produce.

City officials might incorporate more bike trails and walking spaces into their long-range plans. Tax breaks could be provided to homeowners who plant vegetable gardens, and zoning laws would be relaxed to permit a limited number of chickens on private property. Community organizers, with the help of municipal governments should expand and subsidize farmers markets as well as fund competitions that reward physical activities. No corporate sponsorship would be permitted. Physicians and hospitals could put up billboards and displays to encourage healthy lifestyles. More local television stations might be mandated to provide more public health programming about healthy living.

Finally, we could get rid of home cooking by institutionalizing it. Let’s face it, there are too many parents who want to spoil their kids by feeding them too many home-made sweets like cake and cookies. Besides, home-cooking is so unsustainable from an environmental standpoint because of the inefficient energy use of home refrigerators and stoves for so few people, as indicated by Rachel Laudan. A much better system would be to have neighborhood kitchens run by cooks professionally trained in nutrition and the culinary arts. It works well for progressive school cafeterias, forward-thinking company dining halls and kibbutzes. This way more palatable and healthy meals could be provided to the American populace, and the number of unhealthy offerings loaded with salt, sugar and fat could be minimized. Neighborhood kitchens could band together to hire obesity specialists to help improve overall health of these communities.

Obviously, some of the solutions mentioned above are impractical, but many of them have been proposed in some form to deal with America’s obesity epidemic. If we do not adopt these solutions, how can the system be made over to make American food great again? Some old familiar sayings come to my mind right about now.

Who decides which foods are healthy and which foods are not? Other than calling on the American public to avoid processed food, there seems to be widespread disagreement as to what constitutes a healthy diet. OK, I understand that sodas, Twinkies, potato chips, ice cream and other junk foods would be among the first to go. But what about beer, bread, coffee, dark chocolate,  kimchi, peanut butter, and soy sauce? Are they all right or should they be banned as well? Do we limit the level of salt, sugar or fat available in each processed product or cooked dish? Do we go all-natural, GMO-free, gluten-free, organic only, plant-based, or strictly vegan? What about plant-based milk or cultured meat or the next new type of food that comes along? Is there such a thing as a humane way to treat an animal raised for food? What are the economic implications of these changes, particularly for the low-wage workers currently employed in the industrial food system? Will the public buy in or will there be massive blowback?

We probably would not want to trust the management of such an effort to the President, Congress or the courts. Should we empanel a board of government scientists, say in USDA or better yet the newly organized HFA, to make these decisions? Probably not, as they may be colluding with Big Food. What about a board drawn from top nutritionists and dietitians? No, they are now becoming suspect too. Maybe an executive bureau led by distinguished food writers such as Gary Taubes, Linda Bonvie, Mark Hyman, Michael Moss, Michael Pollan, Stephanie Sacks, and Vani Hari could make this policy? I, for one, would have some trouble with such a group. Besides, even if the ideal system could be developed, a change in administration could interfere with carefully laid plans. If that seems to be a cop-out, look at what is happening to the Consumer Financial Protection Bureau.

The point is that it is easy to condemn current practice, but it is so difficult to construct a workable solution. In an environment with the food movement on one side and Big Food on the other, true progress is unlikely. Before calling to “change the institutions that feed us”, as Zeide suggests, we had better have a plan that is flexible enough to adjust to changing conditions. I never envisioned a future “that all American cooking one day be based on prepackaged items” and I know no other food scientists who do. But I believe that prepackaged items have improved convenience of food preparation and helped make other profound changes in our lives that many of us would hate to give up. If we truly want a better food system, we will need to work together and cut back on the adversarial situation we find ourselves in. It does not seem to be working very well in our national political dialogue. What gives us the idea that it can work in an area that is much more complicated—food?